My birthday this year was one I wanted to remember years down the road so I naturally I booked a trip to the city of my dreams. Because YES, I am THAT extra. But why not though? Live life to the fullest!

I celebrated turning 21 in New York with Matt.

My birthday was 29 hours this year (adding up US and UK time zones! 😆)

I didn’t have much planned myself, the only thing I really wanted to do was watch a Broadway show because I mean, that’s one of the main things you HAVE to do when you’re in New York, right? One of my colleagues had mentioned that I could purchase cheap tickets at Times Square, so most of my morning plans were to line up and buy one for the afternoon show that day.

Matt had different plans though. 😅

He surprised me with two front row tickets that morning so that we didn’t have to line up AND a bonus: we would get an awesome view of the performance. It was such a thoughtful surprise and a great way to start my day, no doubt!

After an awesome breakfast at Joe & the Juice which by the way – has THE BEST berry smoothies ever – we headed back to the hotel where Matt surprised me yet again (this is a recurring theme throughout this post!) with the most wonderful birthday gift ever. 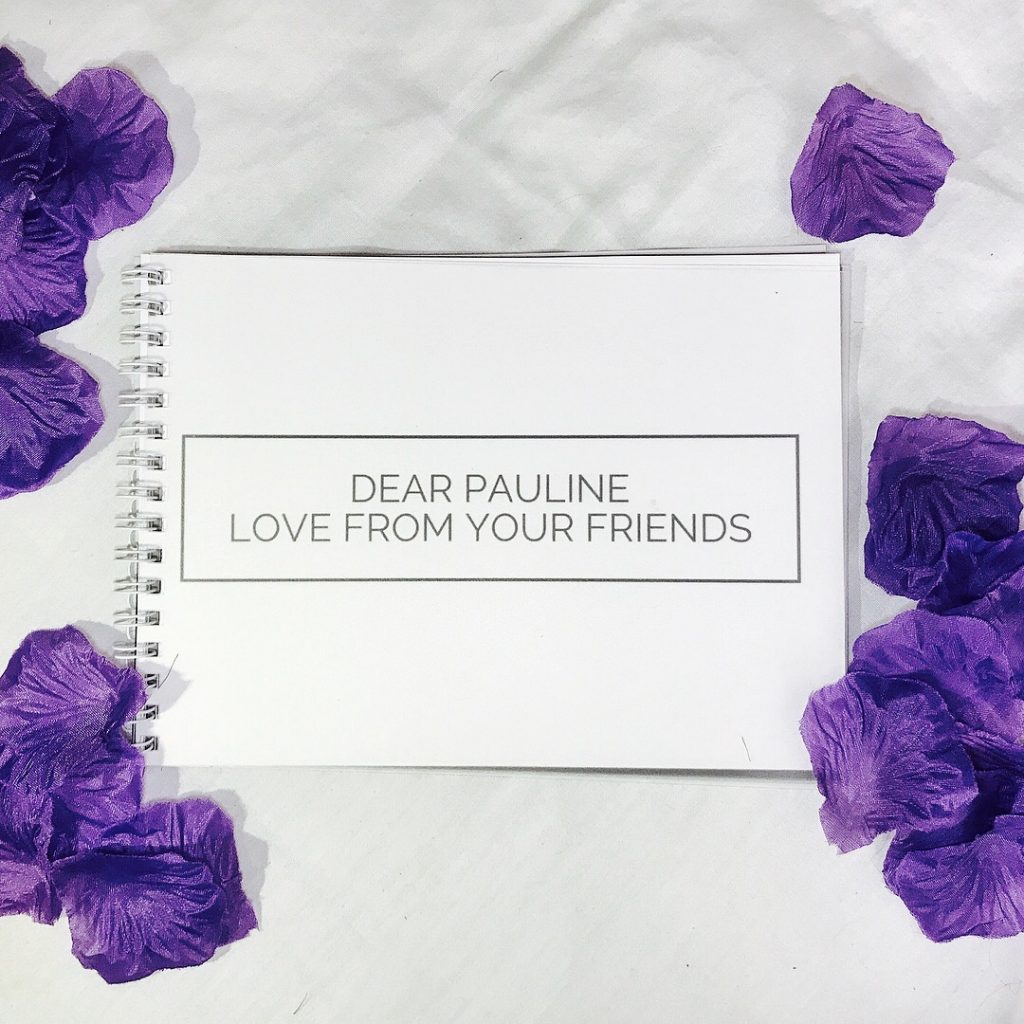 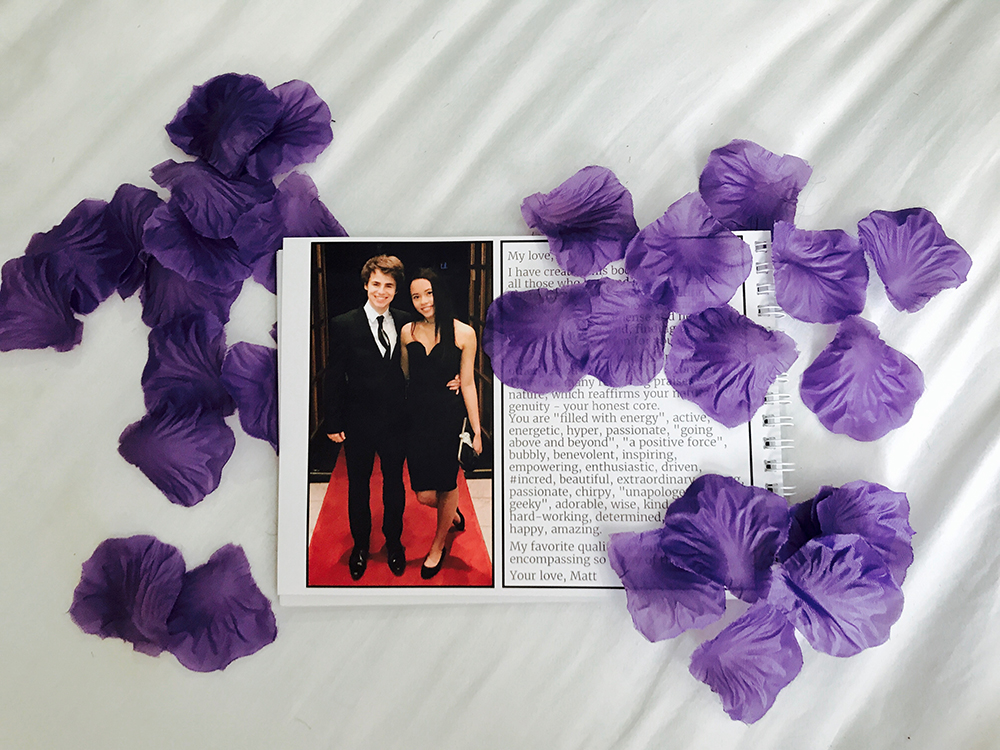 He created a booklet that had all my friends from different groups (from my Code First: Girls gang to BMS friends and blogging gals) all wishing me a happy birthday and leaving incredibly kind messages. I cried, laughed and smiled (seriously guys my face really hurt the whole day) It’s funny because I hadn’t ever received a card with lots of people signing it before my colleagues did recently for my birthday.

I remember mentioning this to Matt a few weeks ago! He told me that he had already created it when I had said this 😂

I posted a sped up version on Twitter and Instagram of my reaction but you can watch it in full below:

I’m really thankful for the effort Matt put into this but also to everyone who took part, I think it’s evident in the video how happy/overwhelmed I was. (I literally could not speak because I had this huge lump in my throat?? I WAS SO EMOTIONAL????)

I’m struggling to put into words how I felt that morning but it was just full of love, appreciation and happiness. Thank you 💓

After I cried away my make-up, we made our way down to Broadway to see Anastasia. I absolutely loved the animation when I was younger, I had two different versions one on DVD and one on VHS (wow, #throwback) both the same story but different adaptations. I hadn’t watched a live theatre performance since I was in my drama class at school so I was pretty excited!

It definitely was an experience, seeing them so close was magical – every single one of them looked exactly like the real life version of the animation! I think I fell in love with Dimitri too, or at least the actor.

I had tears and goosebumps throughout. Matt said he got quite emotional too.

During the songs, I tried not to sing too much (especially during Journey to the past, gahh) and end up ruining the actual performance. I have to admit that was the most difficult thing I ever had to do! 🎤

The show finished at around 5 pm. There was an opportunity to see the actors at the end outside the theatre but as we had front row seats, we were one of the last out so we didn’t get to see them with all the crowds of people.  😅

You can watch the “trailer” for the Broadway show here if you’re interested!

We headed out to dinner, where Matt took me to a rooftop rotating restaurant just a block from Broadway. It was incredibly fancy to the point I felt a little out of place most of the time, but the food was really filling and the whole experience of eating your food then looking up to see a totally different setting (not only outside but inside) was fun!

As we were having dinner, I was complimenting the view when Matt then said, “after this, you’ll get the best view!” I had been led to think for ages that we were going up another building to see a different view of NYC but boy was I wrong. 😆

Next thing I know, I’m in a car to New Jersey. Then at an airport in New Jersey. Then looking in horror at a tiny plane and listening to one of our two pilots saying, “it’s a small plane so you might feel the wind hitting it a bit more. It can get bumpy. But here’s a sick bag.”

So Matt’s final surprise was a plane ride across New York to get a bird’s-eye view of NYC. Best view I’d ever get right? YEP BUT NOPE was my initial reaction. As you guys know, I have always had really bad anxiety when it comes to travelling. Getting to New York, Portugal, France and Amsterdam have been my biggest achievements this year so far, overcoming my anxiety is hard work but I prove it to myself time and time again that I can do it, but at that moment, could I get on a TINY plane and fly over NYC as the sun set?

Matt took a video of my reaction and of the flight, watch it below if you’re interested:

Initially, I was terrified. My fears and worse case scenarios filling my mind. But as soon as we got up there, I let go and locked my gaze at the beautiful city below me.

Yeah, there were tears. Lots of them. 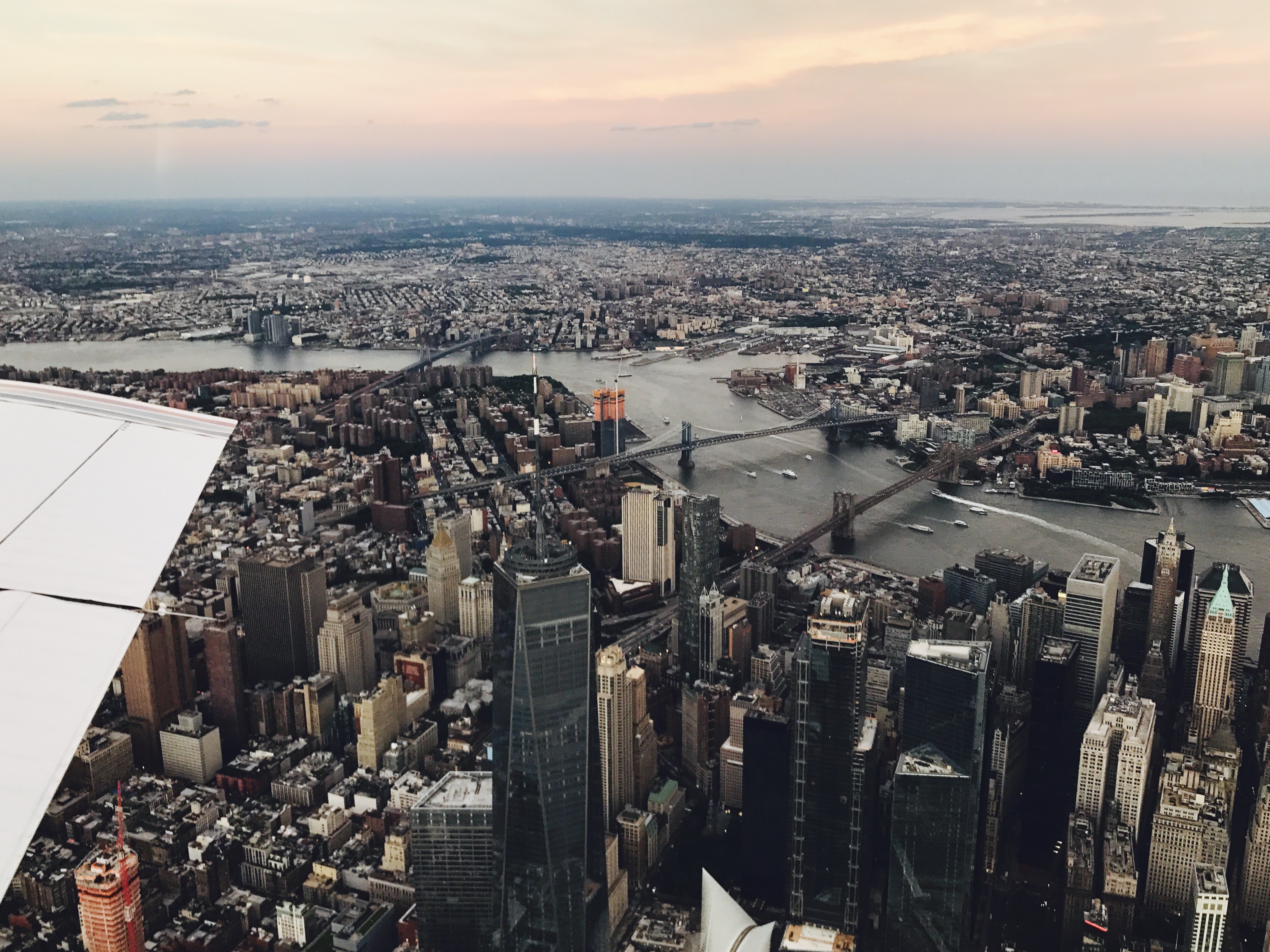 I wasn’t in staring at my computer screen, wishing I was in NYC, I was right there.

I wasn’t wishing that I had a drone so I could fly it above the skyscrapers in NYC to get a bird’s eye view of the city. I WAS THE DRONE.

I wasn’t in the office playing with the HTC Vive flying over NYC, I was right there. 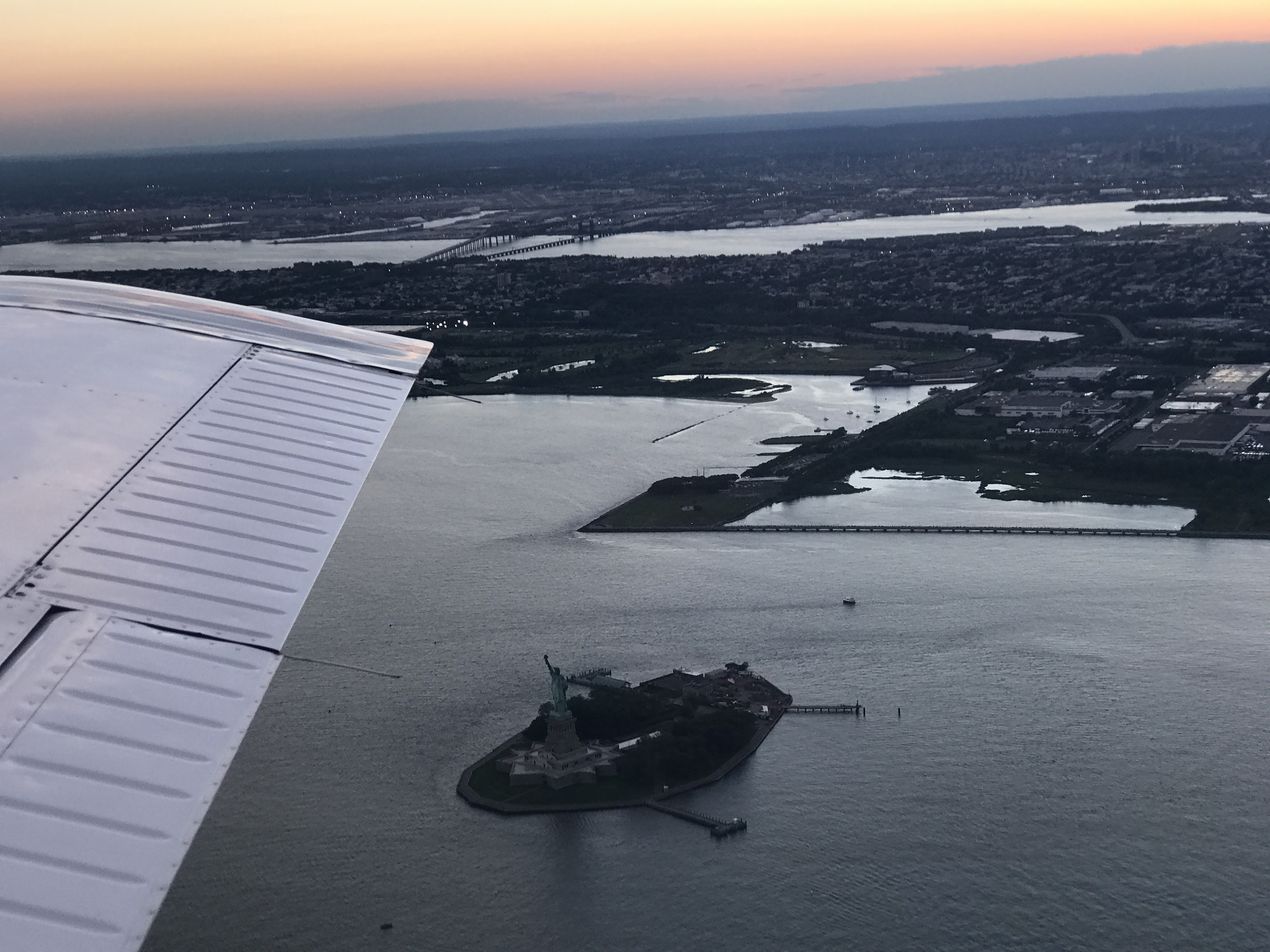 I was overwhelmed and so so so incredibly thankful for the experience. Matt had said he was worried that I would hate it and hate him for organising it but it was single handily made my NYC trip the experience of a lifetime.

As we were landing back in New Jersey, it was getting darker and I watched the lights turn on across the city. It was so fucking beautiful.

And as I always say after overcoming my fears, “HEY CAN WE DO THAT AGAIN!??!?!?”

I told Matt how I wanted to see the city awake in the dark so once we got back to Manhattan, we went up the Empire State Building where we got to experience another view of NYC, at night. This was something that I had only dreamed of before, a view I’d see in movies or on my wall as a poster. 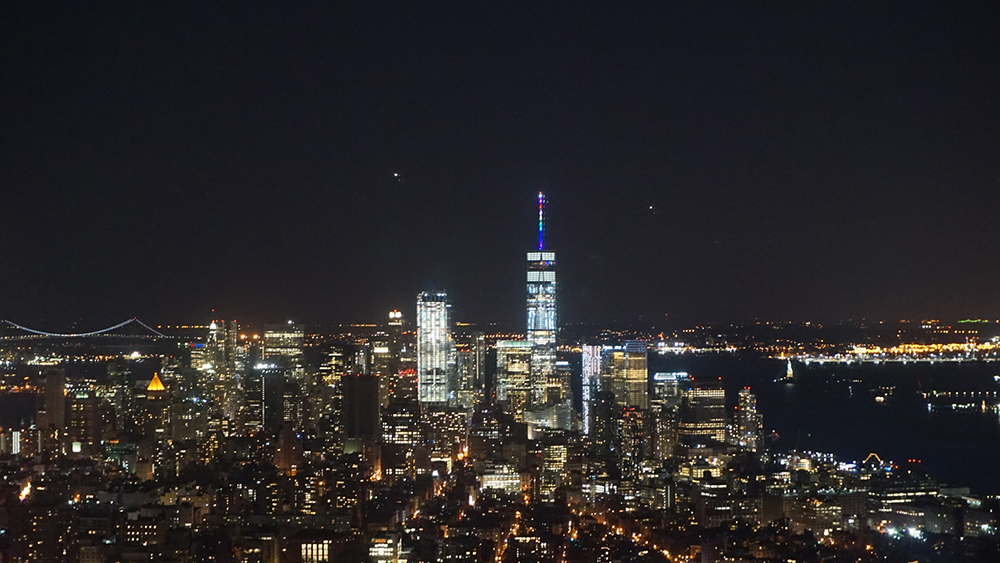 It didn’t disappoint in real life. 😍 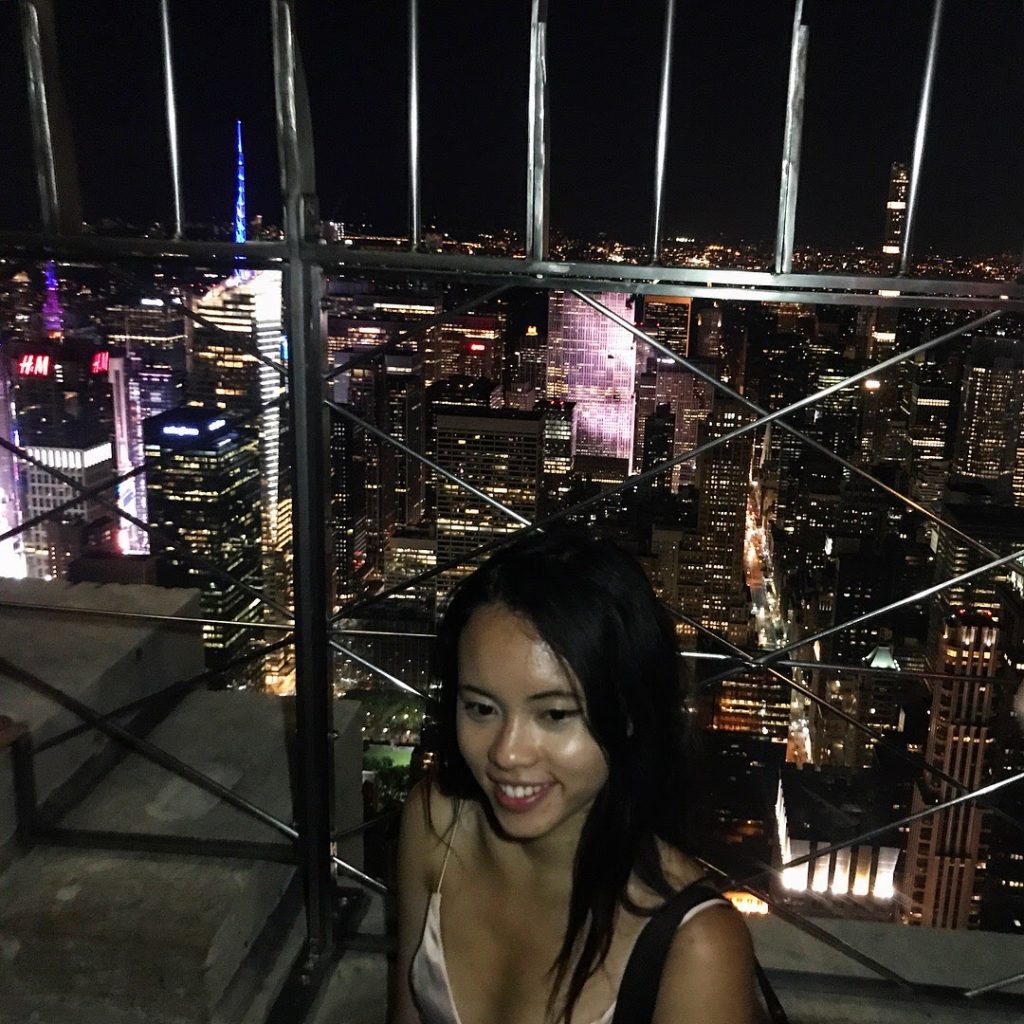 Storytime: A tourist (from Australia, I LOVED HER ACCENT 🐨) asked us when we were heading back down if I was the girl who managed to get really nice photos up the Empire State Building 😆 Matt had come prepared with taking photos at low light – he brought a little light that you can stick on your phone so that you always have perfect lighting where ever you go 😂

She was really impressed by this and said that she’s going to buy one herself so that her photos would turn out good too. Props to you, Matt! 😝

It was then I realised that we might’ve attracted too much attention but HEY DID I TELL YOU IT’S MY BIRTHDAY TODAY?! 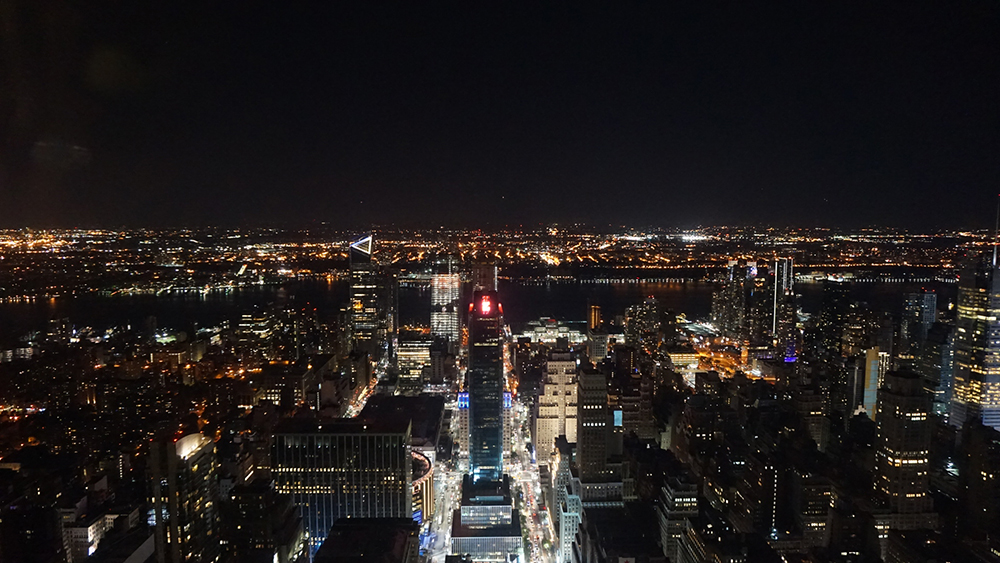 My 21st birthday was definitely one I won’t ever forget. I always talk about how grateful I am for all the love and support from everyone in my space in real life and online and so this might not sound all that different but honestly, THANK YOU all for making my day so special. If I could hug you all I would but for now *virtual hug*

A big shout out to Matt for being wonderful. You make me the happiest. 😁

Since turning 20, I encountered the biggest changes, lost a lot, entered a path of uncertainty, hit rock bottom a few times with my anxieties worsening but going into 21, I refused to stay where I was. In the last year, I regained my focus and have achieved so much personally and professionally. I have changed, definitely. I eat kale now, I like flying planes, I openly talk about my coding abilities without fear of judgement, I kick butt when I work out, I smile even more, who knew that would even be possible? 😆 I’m also much more confident in myself and damn, I have learned to love and accept myself head to toe.

Although I’ve grown a lot, I still think I’m a long lost Disney Princess, eat plenty of Italian food (#bulking), laugh at Hamdah’s Yorkshire accent, and as usual, appreciative of everything and everyone so that y’all hear it loud and clear.

I made my birthday wish on the last hour of my birthday. It wasn’t the same one I had since I was seven anymore because, on the 24th of June 2017, I made it happen.

This site uses Akismet to reduce spam. Learn how your comment data is processed.